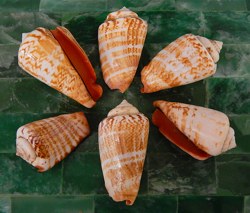 $16.00
The Strawberry Conch is a sea snail and is found in the western Pacific and east Australia. They are often mistaken for cone snails and will have light tan markings on the outer shell with a light pink/red color inside. Strawberry Conch Shells 1.75"-2.5" Sold By The Gallon.
Conomurex luhuanus, common name Strawberry conch or Tiger conch, is a species of medium-sized sea snail, a marine gastropod mollusk in the family Strombidae, the true conchs. C. luhuanus is found in sandy habitat among corals in the Indopacific region. They feed on algae or detritus, move with a modified foot, and have complex eyes compared to other gastropods. The shell of C. luhuanus ranges from a more common length of 5 cm, to a maximum length of 8 cm.[3] C. luhuanus is often mistaken for a cone snail, mainly because of the conoidal outline of its shell, which is relatively unusual among the Strombidae. Its stromboid notch, though not as conspicuous as observed in many species that used to belong to Strombus (such as Lentigo lentiginosus), is deep and easily distinguished. The interior may be slightly lirate. The external color of the shell can be either white with an orange, brown/tan pattern of blotches, or completely brown/white. The interior is usually colored strong orange, red or pink, and the inner lip border is black or chocolate brown. From Wikipedia, the free encyclopedia