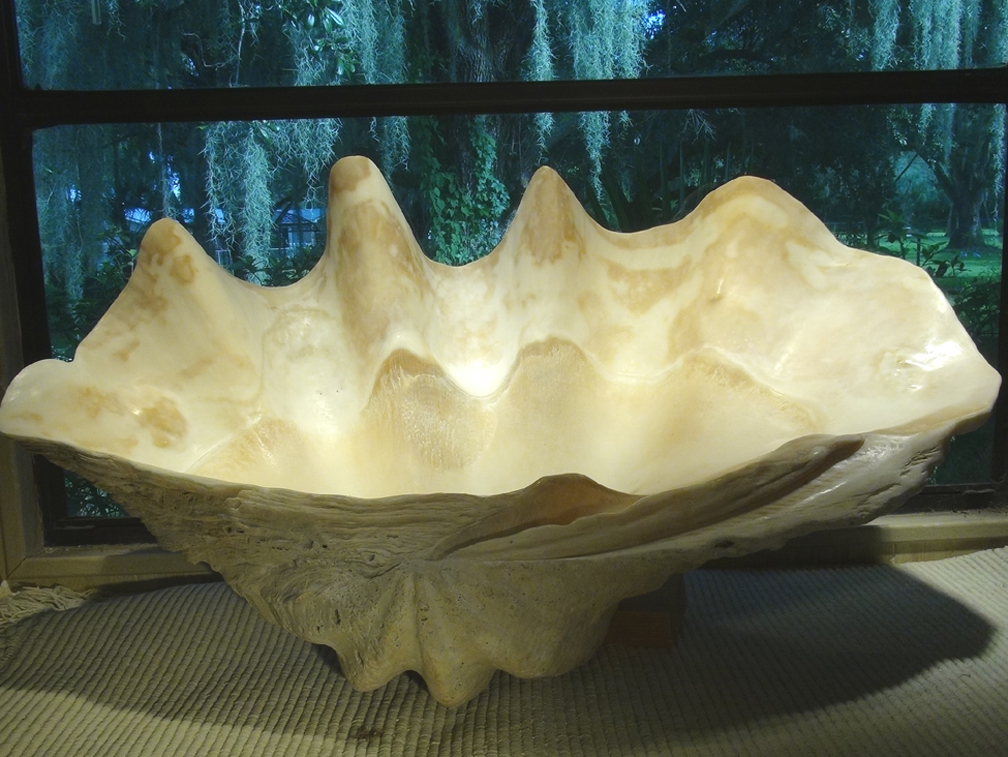 $5,800.00
Very Large and heavy Beautiful Tridacna Gigas also known as the Giant Clam. This shell is a beautiful display piece. It measure 35"x 22" and weighs a whopping 165 pounds. This shell has a lovely natural caramel color. Own a true piece of history. These are no longer allowed to be imported so they have become extremely rare. This shell is approximately 60 years old.
The giant clams are the members of the clam genus Tridacna that are the largest living bivalve mollusks. There are actually several species of "giant clams" in the genus Tridacna, which are often misidentified for Tridacna gigas, the most commonly intended species referred to as the giant clam. Tridacna gigas is one of the most endangered clam species. Antonio Pigafetta documented these in his journal as early as 1521. One of a number of large clam species native to the shallow coral reefs of the South Pacific and Indian oceans, they can weigh more than 200 kilograms (440 lb), measure as much as 120 cm (47 in) across and have an average lifespan in the wild of over 100 years.[3] They are also found off the shores of the Philippines and in the South China Sea in the coral reefs of Sabah (Malaysian Borneo). The giant clam lives in flat coral sand or broken coral and can be found at depths of as much as 20 m (66 ft).[4] Its range covers the Indo-Pacific, but populations are diminishing quickly, and the giant clam has become extinct in many areas where it was once common. The maxima clam has the largest geographical distribution among giant clam species; it can be found off high- or low-elevation islands, in lagoons or fringing reefs.[5] Its rapid growth rate is likely due to its ability to cultivate algae in its body tissue.[4] Although larval clams are planktonic, they become sessile in adulthood. The creature's mantle tissues act as a habitat for the symbiotic single-celled dinoflagellate algae (zooxanthellae) from which the adult clams get most of their nutrition. By day, the clam opens its shell and extends its mantle tissue so that the algae receive the sunlight they need to photosynthesise. From Wikipedia, the free encyclopedia