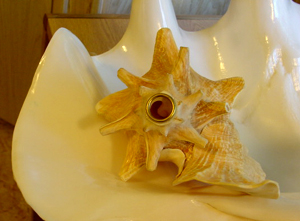 Conch Shell Horns Have Historically Been Used by The Royal British Navy for 500 Years as Signal Horns. These Horns are also Coast Guard approved Signal Horns. Available in sizes from 8" to 11" They make great gifts and are also commonly used to officiate a wedding ceremony. All horns come with a brass mouthpiece. Please let us know if you would not like the brass mouthpiece. Click below to listen to the Conch Horn played by Don Chilton.

Aliger gigas, originally known as Strombus gigas or more recently as Lobatus gigas, commonly known as the queen conch, is a species of large edible sea snail, a marine gastropod mollusc in the family of true conches, the Strombidae. This species is one of the largest molluscs native to the Caribbean Sea, and tropical northwestern Atlantic, from Bermuda to Brazil, reaching up to 35.2 centimetres (13.9 in) in shell length. A. gigas is closely related to the goliath conch, Lobatus goliath, a species endemic to Brazil, as well as the rooster conch, Lobatus gallus. The queen conch is herbivorous. It feeds by browsing for plant and algal material growing in the seagrass beds, and scavenging for decaying plant matter. These large sea snails typically reside in seagrass beds, which are sandy plains covered in swaying sea grass and associated with coral reefs, although the exact habitat of this species varies according to developmental age. The adult animal has a very large, solid and heavy shell, with knob-like spines on the shoulder, a flared, thick outer lip, and a characteristic pink or orange aperture (opening). The outside of the queen conch is sandy colored, helping them blend in with their surroundings. The flared lip is absent in juveniles; it develops once the snail reaches reproductive age. The thicker the shell's flared lip is, the older the conch is.[9] The external anatomy of the soft parts of A. gigas is similar to that of other snails in the family Strombidae; it has a long snout, two eyestalks with well-developed eyes, additional sensory tentacles, a strong foot and a corneous, sickle-shaped operculum. The shell and soft parts of living A. gigas serve as a home to several different kinds of commensal animals, including slipper snails, porcelain crabs and a specialized species of cardinalfish known as the conchfish (Astrapogon stellatus). Its parasites include coccidians. The queen conch's natural predators include several species of large predatory sea snails, octopus, starfish, crustaceans and vertebrates (fish, sea turtles, nurse sharks). It is an especially important food source for large predators like sea turtles and nurse sharks. Human capture and consumption dates back into prehistory. From Wikipedia, the free encyclopedia